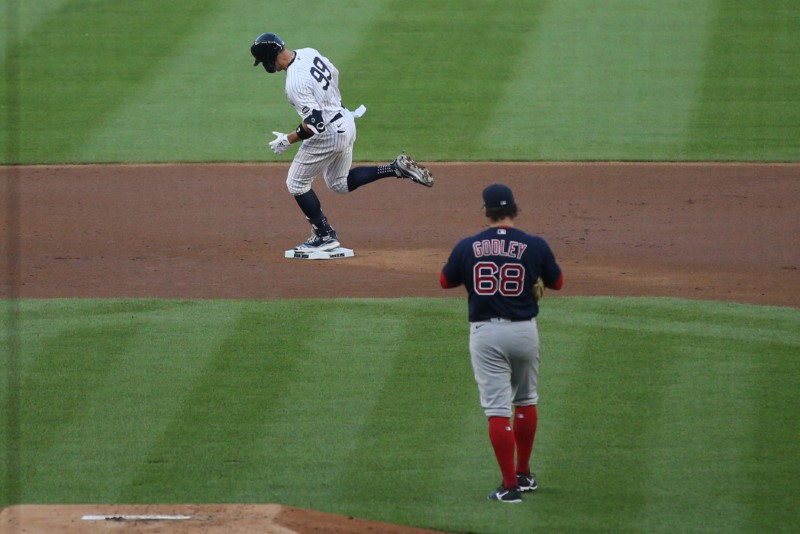 Aaron Judge homered for a career-high fourth straight game, Gio Urshela hit his first career grand slam and the New York Yankees continued their hot start to the abbreviated season with a 5-2 victory over the visiting Boston Red Sox on Saturday night.

The Yankees won their fifth straight thanks to the early power by Judge and Urshela and now have 14 homers in their first seven games while getting off to a 6-1 start.

Xander Bogaerts hit a two-run double off Masahiro Tanaka as Boston lost for the 10th time in its last 11 games at Yankee Stadium, including the fifth straight.

Tanaka returned from a mild concussion — sustained when he was struck by a line drive by Giancarlo Stanton on July 4 — and allowed two runs on three hits in 2 2/3 innings. He struck out three, walked one, threw 51 pitches and was lifted after Bogaerts doubled.

Michael Hermosillo’s sacrifice fly scored Matt Thaiss from third base in the bottom of the 10th inning to lift Los Angeles over Houston in Anaheim, Calif.

The Angels began the 10th with Thaiss on second base, and David Fletcher moved him to third with a single to right field. After Brian Goodwin struck out and Anthony Rendon was intentionally walked, Hermosillo lifted a fly ball to right field off Nivaldo Rodriguez (0-1) deep enough to score Thaiss and give the Angels the win.

Astros starter Zack Greinke was sharp from the outset. He was perfect through 5 1/3 innings, retiring the first 16 batters he faced until Taylor Ward singled with one out in the sixth. The Angels then surged to a 3-1 lead before the Astros jumped ahead 4-3 in the ninth, only for Los Angeles to force extra innings.

Los Angeles powered up for four home runs, including a three-run shot from Chris Taylor, on its way past Arizona in Phoenix.

Edwin Rios and Matt Beatty made the most of their infrequent chance to be in the lineup, each hitting a home run, and AJ Pollock added a two-run shot. Justin Turner just missed a home run, settling for a two-run triple, and hot-hitting Corey Seager had two hits.

Seager has reached base in all nine Dodgers games. Los Angeles, which won for the fourth time in five games, scored five runs in the top of the fifth inning, chasing Arizona starrer Luke Weaver (0-2).

Robbie Grossman’s one-out double scored pinch-runner Tony Kemp from second base in the 10th inning as Oakland rallied to win at Seattle.

Chad Pinder hit a two-run homer as the A’s snapped a three-game losing streak and put an end to the Mariners’ three-game winning streak.

Pat Valaika hit a soft, walk-off single into short right field to give host Baltimore a victory over Tampa Bay.

Valaika came up with runners on first and third and two outs and blooped his single to right off Chaz Roe, who had just replaced Oliver Drake (0-2). The Orioles had a 4-1 lead heading into the eighth but couldn’t hold it.

Tampa Bay has lost the first two games of the series and four in a row overall. Travis Lakins (1-0) got the win in relief.

Ian Happ and Javier Baez hit solo homers, and Kyle Schwarber smacked a two-run shot as the Cubs won their second straight game and fifth in the past six.

The right-handed Chatwood (2-0) gave up three hits and walked two in a 96-pitch effort. He has fanned 19 and allowed one run and six hits in 12 2/3 innings over his first two starts.

Eddie Rosario also homered, and Marwin Gonzalez added two hits for the Twins, who won their second straight over the Indians after getting blanked, 2-0, in Thursday night’s series opener.

Maeda (2-0) struck out six and was brilliant in his Target Field debut, holding Cleveland hitless for 4 1/3 innings before Bradley Zimmer barely beat out an infield chopper that had a 40.5 mph exit velocity to second baseman Luis Arraez. Minnesota challenged the safe call, but after a lengthy replay review, the play stood.

The winning pitcher was Josh Tomlin (1-0), who threw 2 1/3 scoreless innings in relief. Tomlin did not allow a hit and struck out three.

The losing pitcher was Mets starter Michael Wacha (1-1), who continued to struggle against the Braves. He surrendered five runs, seven hits and two walks while striking out five in four innings and dropped to 0-4 against Atlanta in seven career appearances.

Trevor Story homered for the second straight game among two hits, Matt Kemp went long for the first time as a member of the Rockies, and Colorado beat San Diego in Denver.

Kyle Freeland (2-0) tossed six shutout innings, Chris Owings had three hits and Charlie Blackmon had two for the Rockies, who have won six of their last seven.

Trent Grisham homered for one of only three hits by the Padres, who had their modest two-game winning streak snapped.

Donovan Solano broke a tie with a two-run single in the third inning, and seven San Francisco pitchers combined to limit visiting Texas to one run over the final eight frames to make it two straight wins in the interleague series.

Evan Longoria got the Giants even with a two-run double in the bottom of the first, before Solano provided his go-ahead hit off Rangers starter Jordan Lyles (0-1) in the third.

Ronald Bolanos (0-2) took the loss for Kansas City after allowing five runs on five hits in 1 2/3 innings. His wild pitch scored one run in the first inning, and then Jimenez added his blast. Jimenez and Luis Robert each went 4-for-6 for the White Sox, who rapped 21 hits.