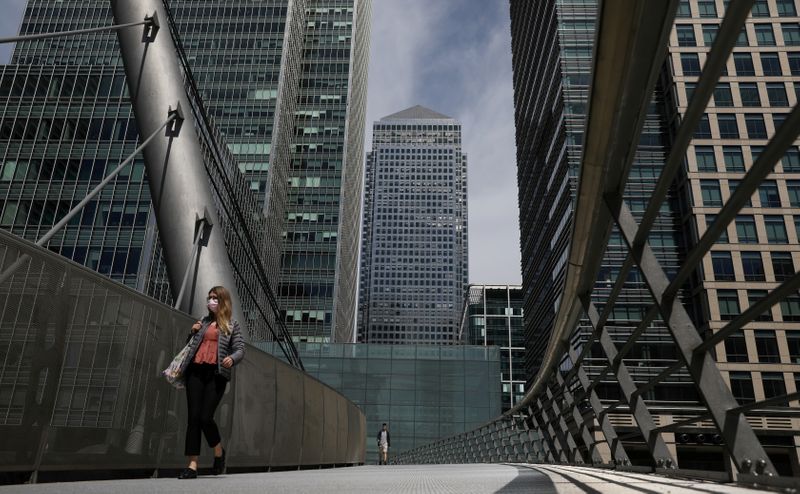 FILE PHOTO: A woman wearing a face mask crosses a bridge in front of One Canada Square in Canary Wharf, following the outbreak of the coronavirus disease (COVID-19), London, Britain, May 18, 2020. REUTERS/Simon Dawson/File Photo

LONDON (Reuters) – The United Kingdom has drawn up plans to require employers to cover 20% to 30% of furloughed employees’ wages from August to reduce the vast burden of the coronavirus crisis on government finances, The Times newspaper reported.

The United Kingdom on May 12 extended its job retention scheme – the centrepiece of its attempts to cushion the coronavirus hit to the economy – by four months but told employers they would have to help to meet its huge cost from August.

“The Treasury has drawn up plans that would require employers to cover between 20 and 30 per cent of people’s wages,” The Times said. “They would also be required to cover the cost of employer’s national insurance contributions, on average 5 per cent of wages.”

Finance minister Rishi Sunak is expected to announce the changes next week, The Times said.

Sunak said on Friday that Britain was facing a “very serious economic crisis” and jobs would be lost in the “days, weeks and months to come”.