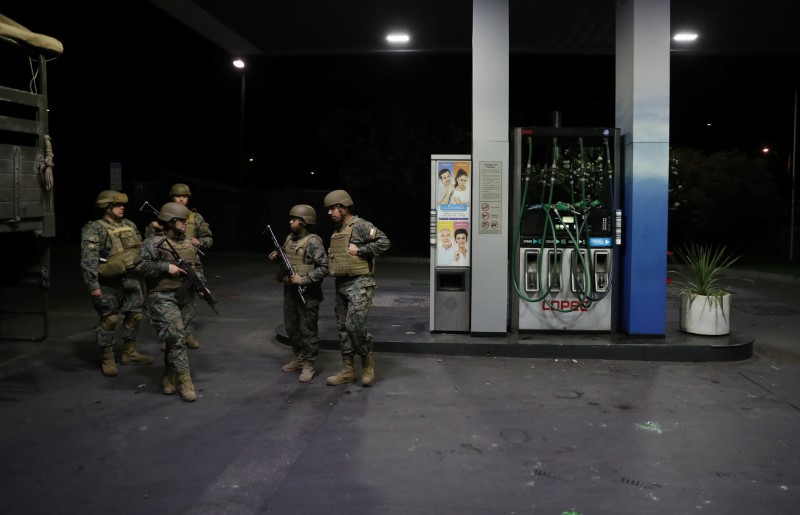 Soldiers stand guard at a gasoline station after Chile's President Sebastian Pinera declaring a state of catastrophe, due to the outbreak of the coronavirus disease (COVID-19), in Santiago, Chile March 20, 2020. REUTERS/Ivan Alvarado

SANTIAGO (Reuters) – Chilean president Sebastian Pinera is under growing pressure to announce a national quarantine by opposition leaders, medical experts and local mayors, who have launched their own measures to try to curb the spread of the new coronavirus.

A total of 56 mayors from central Chile on Friday wrote an open letter to Pinera declaring that since quarantine had proved to be the most effective way of containing the virus in other countries, Chile “must not delay” in following suit.

Some mayors have gone so far as to send municipal security vehicles to patrol neighborhoods with loudspeakers urging people to report anyone with symptoms leaving their homes.

Fuad Chahin, the centrist Christian Democrat party president, said with Chile now at 434 known cases of the highly contagious respiratory illness since the start of the month, Pinera should follow neighboring Argentina’s example with a “total and immediate quarantine.”

Pinera also came under fire from the head of the National College of Surgeons, Izkia Siches, who said that without clear leadership, local authorities would inevitably make their own plans. “Measures have been lacking and the president is not engaging in dialogue,” she said.

Pinera’s administration is already reeling from five months of intense protests over inequality, which battered Chile’s infrastructure and economy and saw his popularity plummet to the lowest levels of any president since the Augusto Pinochet dictatorship ended in 1990.

Health Minister Jaime Manalich slammed local leaders calling for the national quarantine in an interview on television network Canal 24 Horas on Friday, saying the demands were driven by politics, populism and a lack of understanding.

“What is being said is absurd, it’s a disproportionate measure,” Manalich said in the interview.

Interior Minister Gonzalo Blumel said the government had already taken measures – including the closure of cinemas, restaurants, bars and clubs on Friday – and would take more.

“The main thing is to adopt them when they are most effective to protect the population,” he said.

The government also said it was considering setting up “quarantine hotels” where people confirmed to be infected with COVID-19, the illness caused by the new coronavirus, would be sent for enforced stays if they did not comply with their quarantine.

An Ipsos poll showed Chileans are increasingly fearful of the coronavirus, and 82% said they support a national quarantine. But only 67% of people aged 16 to 35 saw the situation as “grave.”

Yerko Marcic, the military chief put in charge of the coastal city of Valparaiso under a state of catastrophe decreed by Pinera, said he had received reports of “many” people going to the beach.

“You’re not on holiday,” he said in a statement broadcast on television. “This is a health emergency. We are out in the streets because we have to be, but you should remain at home.”

Spain sets aside another $56 billion for ailing companies