Home Politics As Job Losses Soar, Will Rescue Package Save the Economy? 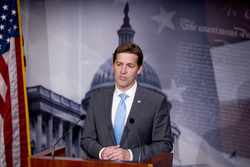 In 2009, out-of-power Republicans made such a mockery of the myriad projects tucked inside the $800 billion stimulus bill that they managed to convince many Americans it hadn’t saved many jobs despite some studies showing just the opposite.

The bill was chock-full of ready-made jokes. There were funds for “sod on the Mall,” “honeybee insurance” and “smoking cessation” programs, along with the far heftier $535 million loan guarantee for the ill-fated solar start-up Solyndra. President Obama personally defended the green-stimulus loan even after it went belly-up.

Republicans went on to win back the House, then the Senate, slowing down Obama’s agenda at every turn. Eleven years later, the worm has turned, and Republicans are now – sans control of the House — in the driver’s seat in Washington. They have President Trump  in the White House and a majority in the Senate and are staring down a global pandemic that has turned a bull market into one of the most bearish this century in a matter of weeks.

The $2 trillion relief package that passed the Senate Wednesday night and awaits a House vote Friday is just the first in a series, lawmakers predict, and the emergency government-spending could continue for months if job hemorrhages persist.

Republicans have spent the last week calling for urgent action as they worked with House Democrats to downsize the opposition party’s Christmas-tree bailout, but they are surprising even some of their own on what they’re accepting, albeit reluctantly.

Fox News hosts have spent the last few days blasting $25 million included in the stimulus for the John F. Kennedy Center for the Performing Arts. “The Five” host Dana Perino, one of President George W. Bush’s former press secretaries, on Wednesday labeled it the “new bridge to nowhere,” a reference to a bridge in Alaska derided in the mid-2000s as an example of congressional earmarks run amok because it would have linked a sparsely populated island to a small city.

Just minutes after Perino’s remarks, Trump came out and defended the funding. He told reporters it was a provision inserted by the Democrats that was originally $35 million before Republicans pared it down. That money didn’t really bother him, he said, because he’s “a fan” of the Washington opera house even though he’s usually too busy to go.

“That’s not a good sound bite, but that’s the way life works,” the president said during Wednesday’s press briefing on the government’s coronavirus response.  “With that being said, the Kennedy Center, they do a beautiful job, an incredible job.”

Moreover, the money is needed because ticket sales are on an indefinite hold, he added. “They have tremendous deficits that are built up. I mean, this thing has been devastating to it. So, I didn't have problem with it, but this was a request from the Democrats because of the fact that they have a facility that's essentially closed.”

Earlier Wednesday, GOP Sens. Lindsey Graham, Ben Sasse, Rick Scott and Tim Scott temporarily threw the relief bill off its fast-track after discovering that the federal amount of unemployment insurance for laid-off American workers would boost the salaries of some to one and half times their income of the job they’d lost.

The formula would incentivize some companies to lay employees off, the opposite goal of the relief bill, they argued. Bernie Sanders then made his own threat to derail the legislation if the provisions weren’t included. The GOP senators quickly fell in line when their leaders agreed to include their objections in an amendment to the relief bill – even though that measure quickly failed.

At a press conference, Graham snarked that they hoped it was just a “drafting error” rather than the “the worst idea” in Washington history. Sasse added, “This is an unprecedented time, [but] the pace of writing this bill is clunky and stinky and messy in a lot of ways.”

But there was no error, countered Senate Republican Finance Committee aides. The staffers told RealClearPolitics they were forced to use a blanket $600 amount for all workers because each state’s unemployment payment formulas are different and it would have taken too long to tailor the bill to avoid the problem.

The catch-all move isn’t all that surprising, say taxpayer watchdog groups. With lawmakers scrambling to stabilize a cratering economy, they’re far more willing to throw money at the problem and save the harder accounting equations for later. That’s all well and good for now — Washington needs to try to stop the economic freefall, they argue. But the bill still must include enough accountability and transparency provisions to track the money later when life gets back to normal — or at least normal enough to start scrutinizing the books.

“We understand where we are. Nobody is disagreeing with the need for this bill,” said Tom Schatz, president of Citizens Against Government Waste. “We just want to make sure there are as few opportunities as possible for this money to be wasted and to ensure its tracked and everybody is held accountable for how it’s spent.”

The relief package’s $2 trillion price tag is nearly half of the country’s annual budget, which should have far better oversight to begin with, he said. And with Washington already suggesting the need for two more stimulus-type bills, Democrats are pushing to go bigger and broader than simply fixing the economy.

“This is a tremendous opportunity to restructure things to fit our vision,” House Majority Whip James Clyburn reportedly told fellow Democrats on a conference call this week. Even after Senate Republicans rejected many “Green New Deal”-style earmarks, Joe Biden doubled down, saying a second major federal economic relief package should include them. Those comments should set off alarm bells, Schatz said, adding that Republicans can’t let their guard down when it comes to Democrats inserting their agenda into additional stimulus bills in the weeks to come.

Similar to oversight of the 2009 stimulus bill, the $2 trillion package includes increased funds for individual inspectors general and the creation of a special inspector general, as well as an accountability board, to oversee Treasury’s $500 billion worth of loan guarantees for businesses. Democrats insisted on more oversight over the corporate loans designed for the airlines and other industries facing a credit crunch because of the coronavirus crisis.

Still, Steve Ellis of Taxpayers for Common Sense points out, there are concerns that in the last version of the bill circulating around Washington the special IG didn’t have subpoena power and the office expires completely after five years whether or not there are still loans that need repayment. Schatz said his organization is homing in on funding in the relief bill that is either equal to or greater than the current annual budget for the federal program or entity.

For instance, the $25 million the Kennedy Center is targeted to receive is the same amount in emergency relief as its $25 million annual operation and maintenance budget even though the problems it’s experiencing in attendance and ticket sales are likely only temporary.

Other federal programs Trump has put on the chopping box in his budget blueprints are set to receive billions of dollars more in the stimulus legislation. Housing and Urban Development community development block grants — broad grants handed out to benefit low-income communities by addressing their housing needs — will now get a $5 billion infusion, $1.6 billion more than the program’s $3.4 billion budget for this fiscal year.

Similarly, the Economic Development Administration, an agency within the Commerce Department that provides grants and funds to economically distressed areas of the country, is getting a $1.5 billion boost, nearly five times its $265 million budget this year. Such spending has raised questions from some quarters about what happens to the government money spigot if the economy turns around in a couple of months and takes off “like a rocket ship,” as Trump has predicted.

The possibility of a quick economic rebound has Carly Fiorina, the former CEO of Hewlett Packard and a 2016 GOP presidential candidate, worried, especially when it comes to the $500 billion provided for corporate loans.

“I think the corporate bailout was much too soon, and maybe we didn’t need it ever,” she told MSNBC this week. If some of the funds don’t end up being needed, it will take an act of Congress to get the money back – something Schatz sees as nearly impossible when the House is controlled by Democrats who have readily followed Sanders’ march leftward and embrace of big-government programs.

If the economy does come roaring back by the late summer or fall, “you can’t physically spend all this money in a short period of time,” Schatz said.  “You’d have to pass a bill to get it back – and right now I don’t see that happening.” But without saying so directly, the Republicans’ collective thinking seems to be that this would be a good problem to have.

Trench Warfare in the Time of Coronavirus